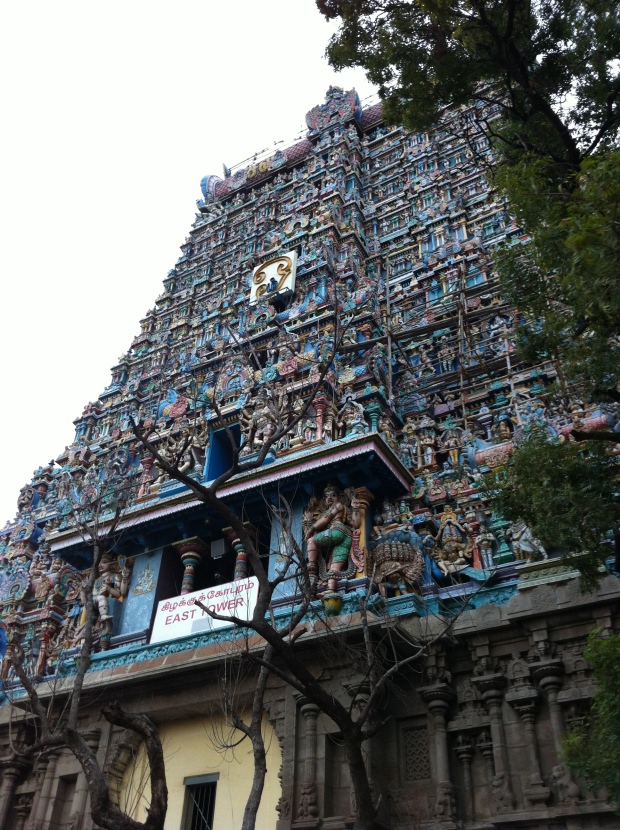 India is a country full of many wonders, from the food to the culture, from the people to the wonderful scenery.  Similar to America, you can experience many season and terrains in India, from mountains to beaches, and many more.  I have been visiting India since I was young, and have had my fill of the urban cities such as Delhi, Kolkata, and Mumbai.  I now have made it a point to visit somewhere new every trip I take to India.  In my last few trips, I began my exploration of the South, starting in Kerala and making my way across and south, to some of the major Hindu temples in the country.  Even if you are not a Hindu or do not know about Hinduism, these are some brilliant and wonderful sites to see all over South India.

A few notes about temple trekking in the south – you may need to leave your camera/smartphone in the car for most of the interiors (or risk checking them with your shoes), and some have strict dress codes as well (long maxi skirts or saris for women, traditional dhotis for men).

Here is a review of some of the wonderful temples you can trek to and some simple itineraries to get you there.

Trek 1: Kerala and the southernmost tip of India

A few years ago I visited Kovalam, an Ayurvedic beach haven in South India.  After a few days soaking up the sun and exploring the backwaters, we headed south to check out some of the lovely temples in the area.

We started by driving all the way south, to the southernmost tip of India at Kanya Kumari.  This is a must do trek, as it is the point where 3 oceans meet – the Bay of Bengal, the Arabian Sea and the Indian Ocean.  There is a sacred Hindu Temple for Devi Kanya Kumari, where you can worship and dip your feet in the place where the three oceans meet. 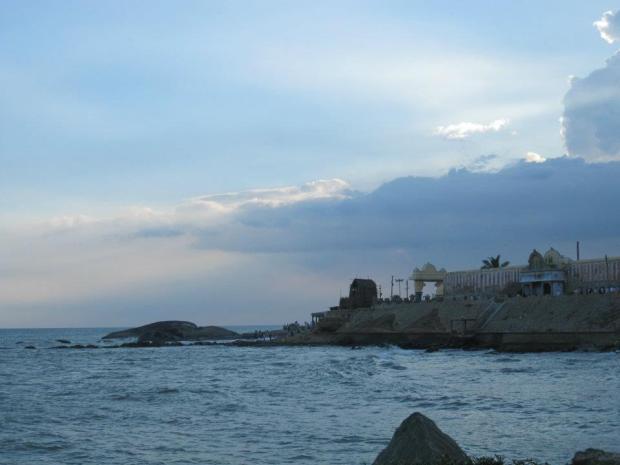 Heading even further south by boat, you can enter the unique island memorial for Sri Vivekandanda, a prominent figure in Hindu culture. This is not exactly a temple, but a lovely memorial to see on your southern trek.

Heading back north to the city of Trivendrum, you can visit the very popular Sri Padmanabhaswami Temple, a Vishu temple which has gained much fame for a massive (20+ billion dollar) treasure they discovered there.  In the days of occupation and war, kings hid their wealth away from invasion, and this time in a temple.  This temple gets packed with pilgrims, so pay an extra donation for a spot in the front (donation is called darshan). 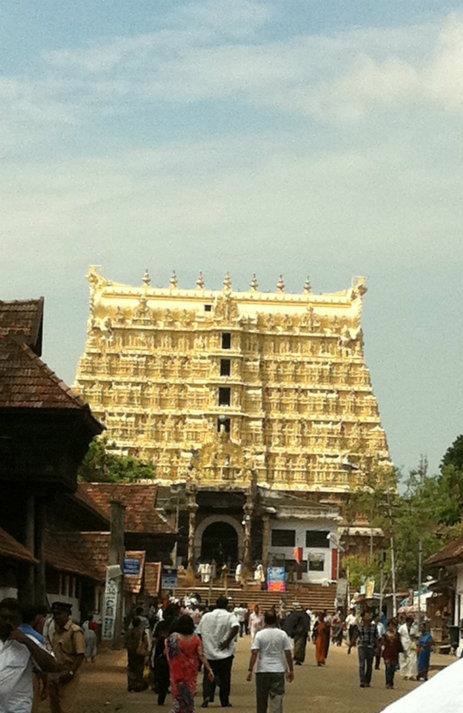 This trek took us about 2 days to complete, with a day of rest in Kovalam.  Definitely a Haute Trek.

Our next trek took us to the southwestern part of India, starting off in Madurai – the temple city.  Madurai has hundreds of temples, large and small, with the largest being the Meenakshi Amman Temple, in the center of the city.  This temple is truly beautiful, and massive – covering around 45 acres.  The city was literally built around this temple.  You will be amazed by the large goprums (towers) on the various corners, where you can enter the temple walls.

goprum of the Meenakshi Temple

They will let you take your cell phone into Meenakshi, but you can only photograph certain areas, such as the hall of 1000 pillars, when you buy a photo pass.

The next stop on our journey was south again, towards the sea.  We stopped in the small town of Uthirakosamangai, and visited the Shiva Temple there, famed for it’s emerald Shiva statue, which is covered in sandalwood paste most of the year.  No matter how small the town in South India, you can still find massive temple complexes, built with such technique and precision, giving homage to the old kingdoms and kings who built them, of the past. 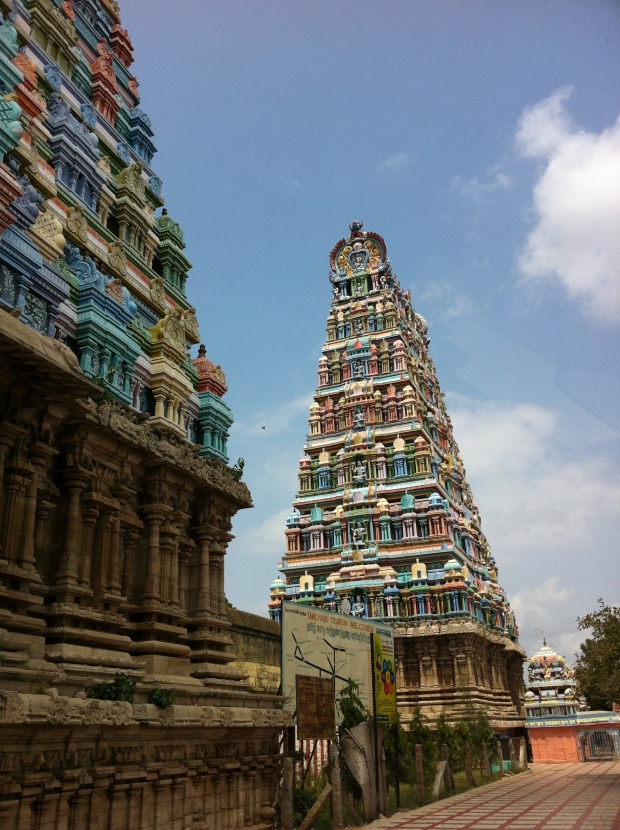 Finally we headed further south, to Rameshwaram, a sacred spot for hindus, and one of the closest parts of India to Sri Lanka.  This is where the final epic battle of the Ramanyana began, giving homage to Shiva again. This is an amazing location to visit, on a key off the Indian mainland.  You arrive via a bridge over the water, with expansive and lovely views.  We even caught the express train heading south!

view of the temple at rameshwaram, from my car

Outside the temple doesn’t look as grand as some others, but inside it contains the longest walkways of any temple in India, spanning nearly 600 feet!  No photos allowed, but it was an amazing site to see and visit.

Hope you enjoy these awesome temple treks in South India, and are inspired to take on some Haute Travel in India yourselves!

Up, up and away!  I’m off again, this time to explore some new spots in Asia, namely in China, Hong Kong, Bali and India, and to escape some of my winter blues.  While some of my trip may be moderately chilly, it will be nothing compared to the lovely midwest and her negative degree days.

Here is the itinerary for the journey, and I will be updating you as we go.

I am getting super excited, and simply cannot wait to see the Great Wall, party in Hong Kong, Surf in Bali, or explore India some more.  Would love to hear from your about tips and ideas for the trip, just email me or mention them in the comments!

Anyways, off to pack!  Asia here I come!

a little reading for my upcoming trip!

I am a devoted travel book buyer, because in the end, they just work. Yea we live in the age of trip advisor (which I use a ton), yelp (also use a ton), and travel reviews, but when it come down to key points, I love a travel book on hand for every trip!

Now, I do my best not to carry these around openly on busy city streets, and love DK Eyewitness Travel’s line of Top 10 books for the handy pocket map  (yes, how un-digital of me). Some of the best books for me are also thin/purse size, so I don’t have to be weighed down.

All this is a bit of an intro to my upcoming adventures in China, Bali and India – so I’ll be sure to keep things updated along the way.  Wishing you happy and haute travels!